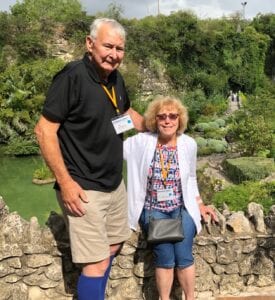 On vacation in North Carolina in 2011 with her husband, Ben, Kathleen was busy weaving and creating handmade baskets. They were having a great time and she was enjoying doing something she absolutely loves. Then, she received a call from her doctor regarding a recent routine mammogram.

Kathleen had a sinking feeling that her vacation was about to come to an abrupt end. She had had years of routine mammograms and subsequent follow-up appointments for other tests, but she just knew something was wrong this time. Those previous experiences had given her the opportunity to process and prepare should she ever need to face cancer. She had decided that should it come to that, she would be ready to face it, to deal with it. Her mindset would be, this is just what it is.

And indeed, her suspicions were confirmed by her doctor’s office: Kathleen was diagnosed with triple negative breast cancer.

“I have a very positive attitude about everything, and I figured I’d just deal with this,” Kathleen said. “But it was a challenge just to sort everything out to make necessary decisions,” she continued. “I had so many questions. Should I begin a chemotherapy or radiation treatment plan? When should I have surgery? Should I participate in clinical trials?” After much consideration, Kathleen decided to join a clinical trial, and three months later she had a mastectomy. 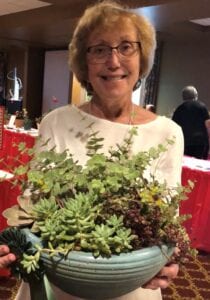 Eighteen months later, after finding a swelling in her neck, Kathleen heard those words again, “You have cancer.” The breast cancer had metastasized.

Once again, Kathleen’s positive attitude prevailed, and she thought she could get past this episode as well. But then, as she recalled, “My husband and I were at a conference about metastatic cancer and they told us that it is not curable. That was the first time I heard that the cancer I had was incurable. That was a big surprise.”

The hits kept coming. Another tumor was found on the other side of her neck. Then, in 2017, Kathleen was starting to feel unsteady when she walked. When she started vomiting, she went to the emergency room where an MRI found a cancerous brain tumor. “The tumor was on the cerebellum, which controls balance, so that’s why I was wobbly,” she stated. In 2019, a tumor was found at the base of her spine, which led to chemo and radiation, as surgery was not an option due to risk of paralysis.

Through it all, Kathleen’s optimism never waned. She started taking yoga classes to help with her balance. She learned about Cancer Support Community through the yoga instructor and began attending programs here about six years ago. “Yoga has been an important part of my exercise program throughout my cancer journey,” Kathleen offered. “The yoga instructor, Abby, is tremendous.”

Kathleen attended yoga and the Cooking for Wellness programs at the Cancer Support Community facility prior to the pandemic, although she had to drive 45 minutes one way. So, when the programs were transitioned to a virtual platform, Kathleen was very pleased. “I hadn’t used Zoom before, so I wasn’t sure exactly what to expect,” Kathleen reported. “But once I learned what to do, it was easy. Now I can attend the yoga programs several times a week right from home. For me, it’s an important part of staying healthy, along with the Workout with Friends and Cooking for Wellness classes.”

Kathleen says her faith in God has been important during her journey. Her husband also has played an active role. After 36 years of marriage, he is a major source of strength, standing by her side and encouraging her. Kathleen recently turned 69 and her goal is to reach her 80th birthday. She continues to have a positive outlook on life, taking it all in stride, one day at a time.