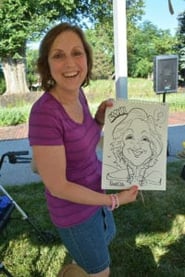 Lynn B. had a feeling that something was wrong in December 2013. After talking with her doctor’s office about it, the doctor recommended a mammogram a couple months before her annual test was due. The mammogram showed something concerning and required a biopsy. “I was pacing around my office, waiting for the doctor to call with the results of the biopsy,” Lynn noted. “They said it was Stage 1B breast cancer, and they immediately scheduled an appointment.”

It was a scary time for Lynn. “I’m usually very frantic and have had panic attacks in the past. I cried in the shower but tried to remain calm on the outside.” At her appointment, the doctor reassured her that they had found the cancer very early and he was confident he could get it all. Lynn felt much better after talking with the doctor. “My family was more scared than I was. But I told them not to pity me, just pray for me.  I think I was calmer than the others around me and I just kept repeating to myself, ‘I’ll be fine!’”

Lynn had a lumpectomy in February 2014, six rounds of chemotherapy and radiation. She continued to work; her boss’s wife helped a couple times a week to make sure the accounting department she worked in was not falling behind.

“I found out about Cancer Support Community Central Ohio at Riverside Radiology. Another patient told me and suggested that I check it out. I called and went to a welcome meeting, then to my first meeting of the breast cancer support group in September.”

Lynn is a regular participant at the meetings. “I look forward to it. The women in my group are inspiring and encouraging and truly my friends.  It’s comforting to be around people who have been through what I have, to hear them say that they’ve been through this and to hear their advice.  And it makes me feel good to be able to share what I’ve been through when a new person joins the group. I hope that can help others who are just starting out on the cancer journey.”

Although it has been more than five years since her surgery, Lynn says there is always that fear of recurrence. But she continues to have regular check-ups with her medical team, and she continues to attend the support group monthly meetings, where she gets hope and encouragement from others who have also been on the cancer journey.

“I appreciate all the services that Cancer Support Community provides, especially since there’s no cost for any of the programs. I would encourage anyone who has been diagnosed with cancer to come to the support group. It’s been a big help to me and I’m sure others would feel the same way.”