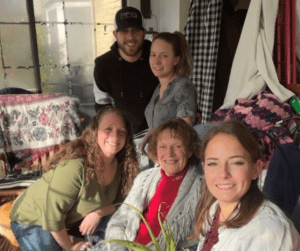 Judy’s cancer journey started in 2009 when she was diagnosed with breast cancer. She had found a lump but hadn’t told anyone for several weeks, fearing the worst. When her friend convinced her to make an appointment, the doctor didn’t think it was cancer but referred her to a specialist who confirmed that it was a very aggressive type of breast cancer. After a biopsy Judy underwent more than five months of chemotherapy to shrink the size of the tumor before she was scheduled for a bilateral mastectomy.

As a single mom of three school-age kids, it was a difficult time for Judy. “I was so weak, I couldn’t do anything for myself,” she offered. “I was terrified that I’d be dead and buried before my kids graduated from high school.” Knowing that others were there to help her family made all the difference for Judy.

Support from friends and family carried Judy through that period. “My neighbors and fellow church members brought food and sent cards of encouragement. They were there for the day-to-day things like cutting the grass, cleaning my house, driving me to the store or doctors’ appointments,” she remembers. “I never knew I had so many friends; everyone was wonderful.”

During her cancer treatment in 2010, Judy was introduced to Cancer Support Community. As soon as she was able to get around, Judy started attending the programs, including Qigong and the healthy cooking classes. “I went to as many programs as I could; I was there all the time.” As a way to start giving back and helping others at Cancer Support Community Judy, who plays the harp, gave a concert for fellow cancer survivors.

“It’s so important not to feel alone when you’re facing cancer,” Judy said. “In the worst part of my journey Cancer Support Community was there for me. The emotional support I received helped me get my life back. I’ve learned that it’s important to know that there are people around you to help, to have a community.”

When the COVID pandemic hit, Judy started attending the programs online. “The Zoom classes are great. They brought the classes right into my house,” she said. She attends the Mindfulness Hour and yoga programs and is a regular participant in the weekly Qigong classes.

Now that it has been more than 11 years since her diagnosis and treatment, Judy finds satisfaction in being able to help others who are going through the cancer journey. “It was important during my difficult times to meet and learn from others who shared the same experiences during their own treatment. It was comforting and encouraging, just knowing I wasn’t alone in this and to have a community of people I could count on.”